Blogging live to you and yours! It’s your boy TWOTALL4UFOOL! Like I said in my previous post February ain’t over! LOL! I was at the Southern California Retro Gaming Expo this past weekend. I figured I would share my thoughts on this expo. It was mad fun and I can’t wait for the next one.

This convention has been around for few years now. It’s bounced around all over So. Cal. This year it was at the Pasadena Convention Center. The parking was pretty bad on Saturday but on Sunday it was a bit better. This was my first time at this expo so I didn’t know what to expect. But little did I know that I was in for a treat.

If you visited their website you would have seen that they had YouTubers scheduled to be there. And they had some big heavy hitters such as Pat The NES Punk, Metal Jesus, John Riggs, 8-Bit Eric, The Gaming Historian, and more. All of them had panels which I thought was really cool. I attended panels for 8-Bit Eric, The Gaming Historian, and Metal Jesus. It was very great to hear what these guys had to say and interacting with them was awesome.

Aside from meeting YouTubers there was a lot of different vendors at the event. Some of the vendors were just individuals selling games and accessories that they had. Others were businesses that were also selling games and accessories. And then there were bigger vendors there promoting products. One of those vendors was Retro-bit. They showed off their Sega Controllers for Genesis, Saturn, and Dreamcast. They are partnering with Sega on these controllers so they are pretty legit.

And of course you could play video games while you there. They had tournaments. Unfortunately I didn’t participate in any of them this time around. They had a Super Smash Bros. Ultimate Tournament, Super Smash Bros. Melee, and Mario Kart Double Dash. They also had tournaments for King of Fighters XIV, and 98 along with Metal Slug. Seems like it was a great selection of games but I wish they had a bit more variety. Those tournaments didn’t really interest me too much. But aside from the tournaments you could just sit down at table and play a retro game console of your choice. I thought that was pretty cool. Everything from NES to PS1 to even the PS3. Some of the TV’s these consoles were running on weren’t the best but hey if the games were working that’s all you really need. Right? But it seems like the handhelds weren’t represented this time around. 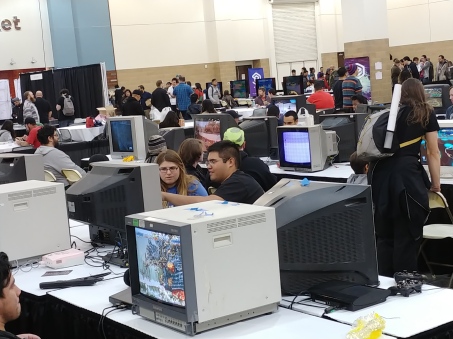 Lastly you could of course play arcade games. They had just about every genre of arcade game represented from sports, to racing, to shooters, to fighting games, and of course beat ’em ups. They also had an air hockey table and few pinball machines. They had games such as NBA Jam, Gauntlet Dark Legacy, The Simpsons, Turtles In Time, Street Fighter II, Mortal Kombat, X-Men and many more. All the games were on freeplay so I got to beat X-Men for the first time. There were six of us playing it. That game is long and complicated so if you ever play it make sure you have someone to help you out.

Overall the event went was pretty cool. The only complaints I had were the food and drinks in addition to the parking. But otherwise it was up to par along with The Retro City Festival that I attended last month. I plan on going to more of these later this year. The Game On Expo which is happening in Phoenix, AZ this coming August is the next one on my radar. I also plan on doing E3 this coming June. Just waiting for tickets to go on sale for that one. And the Portland Retro Gaming Expo is happening this October. That is looking more like a reality.

I got to give a shoutout to fellow blogger KT Martin from Wintendo 64. I recently did an interview with her. She wrote a post a while back entitled “The Ultimate Comic Con Budget Guide”. One of the pieces of advice she gives is to buy your tickets early. And she is definitely right. Look for tickets early and you’ll find early bird tickets most of the time. I should also add if you plan your trip earlier you should save quite a bit of money. Like booking a flight early on to get cheaper flights and booking hotels way in advance to. That is the best way to prepare for any con if you ask me.

Anyway I got to ask the question. Did anyone reading go to the So. Cal Retro Gaming Expo? If not is there a con/expo/festival near you that you want to attend later this year? Let me know in the comments below. Until next time! Blogging live to you and yours! It’s your boy TWOTALL4UFOOL! Remember that TOGETHER EVERYONE ACHIEVES MORE! Thanks for reading folks. See you all next time