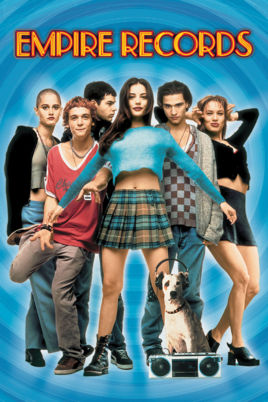 Blogging live to you and yours! It’s your boy TWOTALL4UFOOL! So what is Empire Records you may be asking? No it’s not a record label or a record store. But it is a movie about a record store. So what made me want to watch this movie? I was bumping around on Netflix the other day and I came across it. After the reading the plot and watching the brief trailer I said to myself why not.

One of the things that interested me in wanting to watch this is definitely the nostalgia factor. This movie was made in the mid 90’s when record stores were looking to be going nowhere. When mp3 players weren’t even being talked about among consumers. And when downloading music illegally was basically unheard of. Not to mention that people were still using cassettes to listen to their music at that time (myself included). Now during that time you had a lot of record stores to choose from here in the US. Tower Records was a big one. You also had Blockbuster Music. I bet many of you forgot about that one. The Wherehouse was also a big music store. And of course Sam Goody. As I’m watching this film I’m just really thinking to myself “damn how times have changed”.

Now the movie itself is considered a cult classic to many. It didn’t do very well at the time of it’s premiere however and I can see why. Many people didn’t see the digital age coming in the mid 90’s. Who would’ve thought that you could listen to music, watch movies, and play games on your cell phones at time. Think about it. The digital age is a big reason why Tower Records, Sam Goody, and the Wherehouse aren’t in business anymore. The closest record store to me where I can get not just CD’s but cassette tapes, and vinyl is in Hollywood, CA at Amoeba Records. If you ever visit LA from out of town definitely check that place out. But that place is about 45 minutes to an hour without traffic from where I live. You can always go to swap meets but that is the closests and perhaps the last true record store in Southern California.

Now what’s happened with music and movies many see the same happening with video games. An all digital age with gaming sounds nice and so far advanced but we are still years away from getting that with gaming. Internet I feel has to get a lot stronger before we get that with gaming. It’s getting closer but as a society we’re just not there yet.

As for the movie itself it was ok. I didn’t find it very funny in my opinion. There were a few funny parts but nothing on the level of other comedy movies I’ve seen. There is a Game Boy being played by one of the characters and an SNES for sale in the display window if you pay attention closely at the beginning of the film. Now just watching this film gave me the overall feel of what it was like to visit an old record store back in those days. Being greeted by employees that love music and willing to help you find what you were looking for.

Now if you have never seen this movie I encourage you to check it out. Whether you are looking for something new or just scrolling through films on Netflix just check it out. It’s only an hour and 30 minutes. Now if you are my age you’ll know what it was like to go to a record store back in those days. If you are younger it may be a history lesson for you some of you. So I ask! Are you going to check out Empire Records? If you’ve seen it what are your thoughts on the movie? Let me know in the comments below. Until next time! Blogging live to you and yours! It’s your boy TWOTALL4UFOOL! Remember that TOGETHER EVERYONE ACHIEVES MORE! Thanks for reading folks! Keep coming back for more great content.