Blogging live to you and yours! It’s your boy TWOTALL4UFOOL! This past weekend was an exciting weekend for me. I visited Arcade Expo 4.0 in Banning, CA. I went last year and I had such a blast. Would this year live up to expectations. They exceeded expectations in my opinion. I found out some useful information on upcoming events and a unique discovery for you retro gamers out there.

So the event took place at the Museum of Pinball which is located in the city of Banning. Banning is a suburb in the Inland Empire region of Southern California. It’s about an hour and fifteen minutes from L.A. (on a good day). The building is old (and in the middle of nowhere), and the place is only open a few times a year for events such as these. The parking can use a bit of improvement in my opinion but once I got to the front gate and paid for my ticket I went. But before I went in I signed the wall and dated it.

From there you could go in two different directions. The pinball room or the arcade room. I decided to check out the pinball machines first. I played a couple of them of course. But for the most part I went around taking pictures of many of the different pinball machines that they have. Different developers have made pinball machines over the years from DataEast, to Bally/Midway. I’m sure at one point or another you’ve seen machines such as these. 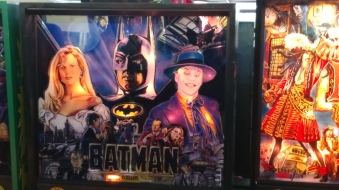 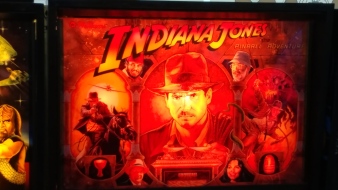 A lot of different pinball machines with pop culture themes from over the years. Some are even not recommended for kids. Trust me you would be surprised. They even had a tournament going on too. But I know I would get smoked in a pinball tournament. Some people are really good at it. And then you got others like me that aren’t. I would have to say the weirdest pinball machine that stood out to me was the Dominoes Pizza pinball machine. That is the only food place I can think of that I’ve see with their own pinball machine. If you can think of anymore let me know in the comments below.

After venturing through the pinball room I checked out the arcade room. This is where the real fun is. So many different arcade games from beat em ups, to racing, to dancing, to shooters, to even older retro games. You name it and it was probably there. And another tournament was going on there as well. The Kong Off which was tournament for the original Donkey Kong arcade game. Again I didn’t participate because I know I wouldn’t stand a chance. If it was a speed run to beat Mario 3, or to get the best time in a racing game I would’ve went for it but I know my limitations. Here are some of the different games that I saw: 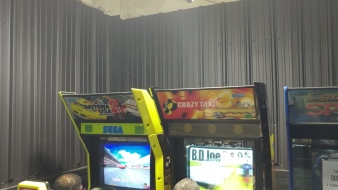 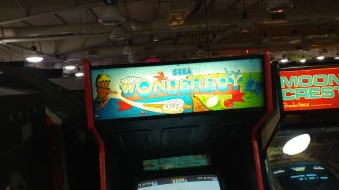 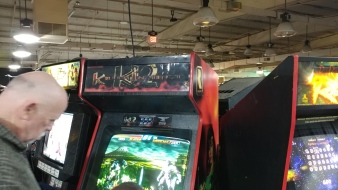 While there I also picked up a few neat goodies. Some decal stickers, flyers about a few retro game events coming up, a magazine called Old School Gamer Magazine, and I found out about a group called SC3 – Southern California Classic Collectors. I hope to go out to one of their events in the near future. And of course the day wouldn’t be complete without getting a shirt and a jacket. I was chopping it up with one of the SC3 guys for a while and he was telling me about retroUSB. If you still have your original retro hardware you need to check out retroUSB. A lot of great stuff over there such as a PowerPak cartridge that you can use to put all of your favorite retro games on with a single micro sd  card. Check them out! You may like what you see!

Overall I really enjoyed myself. As for upcoming expo events E3 is up next. I really hope to be at that event this year. Also for next year we got the Retro City Festival which will be happening in Pomona, CA, and the Southern California Retro Gaming Expo which will be in Pasadena, CA next year. I hope to be at one of those if not both of those events. Are you guys planning on attending any gaming expos in your area? Let me know in the comments below. And also if you live in So Cal and want to meet up at any of the events let me know and I’m sure we can work something out. Blogging live to you and yours! It’s your boy TWOTALL4UFOOL! Remember that TOGETHER EVERYONE ACHIEVES MORE! Thanks for reading folks, give it a like you enjoyed this post, and come back soon.

Check out some of the decal stickers I picked up: