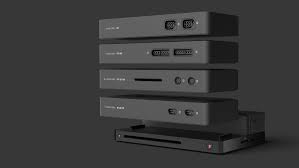 Blogging live to you and yours! It’s your boy TWOTALL4UFOOL! For years now we’ve seen manufacturers come out with clone systems of retro consoles. It’s gotten to the point where I feel there are just too many of them. Most of the ones that have come out recently will play on your HDTV however. If you want to do that with your original hardware that can be a pain unless you have a CRT TV laying around. Also some of these retro clone consoles can be a bit pricey if you ask me. But this one I recently just saw might be most arguably the best one I’ve seen yet. Polymega is the name of it. And this plays multiple retro consoles both CD based and cartridge based! I can say that there is nothing like it that is out right now.

So this thing starts at $250 right now for the discounted price. And that will be the base unit which will play CD based games which include PS1, TurboGrafx-CD, Sega CD, Neo Geo CD, and most recently added the Sega Saturn. I’m sure Sega Saturn is going to get a lot of people’s attention. It will also come with four separate modules (all sold separately) if you want to play cartridge based games. One for the NES. One for SNES. One for the Sega Mega Drive/Genesis and 32X. And one for PC Engine, TurboGrafx-16, and SuperGrafx. All of these modules are $60 a piece. They will also come with a controller inspired by that original console. And they look pretty sweet for the most part. One question though? What about the Sega Master System?

So this unit will come pre-loaded with games. You can also load games on it and it will dump the game on to the hard drive so you can play it again without having to re-insert the cartridge, disk, or CD. However you cannot pre-load ROMs onto this unit digitally. According the FAQ anyway! Also as I was reading through the FAQs it looks like it is under some kind of crowdfunding and they are trying to make $500,000 within the next 35 days as I type this. If they don’t then they will refund all the pre-orders and try to find out why there isn’t enough interest behind it.

So for my thoughts! Good luck getting to $500,000 Polymega. This thing is real expensive if you ask me. It may be for the person that has a lot of original games laying around, but for the people who don’t I really don’t see them going to a local gaming store and buying an old game that is probably overpriced. The intial base is $250. For $50 more I can get a current gen console. Now I understand this is going to play a lot of systems but what if I want all four bundles? Well they have two packages for that. One is a Deluxe package and the other is an Ultimate package priced at $459 and $599 respectively. I’m sorry but that is too much money to be spending on hardware to play games that are OUT OF PRINT! I feel that the average consumer who wants to play classic games will watch a tutorial on emulators, download one, find some games in the process, figure out how to do it, and save a bunch of money in the process. So it looks incredible but too expensive. I feel there are alternative ways to play your retro games. It’s not worth it. Unless you have the games already then go ahead. Otherwise save your money.

So with them having to make $500,000 in a little over a month from now this thing may never see the light of day. If they do reach their goals I’ll eat my words and say I was wrong. Anyway what are your thoughts on this thing? Are you gonna purchase one? If you do which module? Let me know in the comments below. Until next time! Blogging live to you and yours! It’s your boy TWOTALL4UFOOL! Remember that TOGETHER EVERYONE ACHIEVES MORE! Thanks for reading folks. Link to their website is here. Check out their trailer below.

2 thoughts on “Polymega: What is it? And my thoughts!”