Happy Saturday Morning folks! Well it’s Saturday morning here on the West Coast as this is being posted to all you readers out there. Blogging live to you and yours! It’s your boy TWOTALL4UFOOL! And I want to know what do you watch on Saturday Mornings? Hopefully none of that junk that they show on network TV. A few months back I was awake early one morning and decided to see what network TV had to offer. I turned it to one of the stations (I forget which ones) and was very disappointed with what I was watching. What happened to all the good Saturday Morning programs? Whether it was a cartoon show, teen comedy, or even NBA Basketball in some cases what I use to watch 20+ years ago on Saturday Morning blows what they have today out of the water. But how did Saturday Mornings get to where it is now? Well that’s what your boy is here for. I have a few theories as to what led up to Saturday Mornings being the way they are now. Time for a bit of a history lesson.

If you go back to the 1960’s when the programs on Saturday Morning were primarily cartoons that was the only day of the week really for kids to watch their favorite programs. You did have some shows that aired in primetime such as the Flintstones and Jetsons but for the most part you had to wait until Saturday to watch kid programming. In some cases up until the late 1970’s repeats of cancelled Saturday Morning programs would air on Sundays. And then the 1980’s came and this is my first theory into what was a major blow for Saturday Mornings. Syndication run shows! G.I. Joe, Transformers, Voltron, Inspector Gadget, and ThunderCats just to name a few. You remember these shows greatly right? None of them aired on Saturday Mornings. With shows such as these getting popular in the mid to late 80’s it really was apparent what kind of shows you could see on Saturday Morning and which shows you couldn’t. I’m pretty sure it would’ve awesome to see G.I. Joe on NBC Saturday Mornings, or Inspector Gadget on CBS. You get what I’m saying don’t you? But the publisher of these shows could produce more episodes of these shows and have them on five days a week regularly so they could promote not just the show but the toy line as well. One thing I feel the 1980’s was about was selling toys. Don’t believe me do a quick Google search.

My second theory behind this is E/I. You ever see that logo in upper right or left hand corner of your TV screen? Well that is the FCC getting involved. I don’t want to get into too much of it (not trying to bore you guys) but simply it has to do with the Children’s Television Act of 1990 where networks were required to show a certain amount of hours of educational programming a week. It got more stricter for networks in 1996 when a lot of them were not following the rules. Now this really pissed me off. Kids are in school for five days a week. Why can’t they have the one day of the week that is theirs. But no! Organizations like ACT (Action for Children’s Television) wanted to kids to not be exposed to action shows such as the ones named earlier in this post. That’s how I feel about it anyway. If you want to read more about E/I here’s a link to the Wikipedia page talking all about it.

My third theory and the nail in the coffin was the rise of cable networks. Channels such as Nickelodeon, Cartoon Network, and the Disney Channel came in and started their original programming. It gave another alternative to kids besides watching what the major networks were putting out on Saturday Morning. Sure it may have started out slow but by the late 90’s those three cable networks had original shows that could rival anything on Saturday Morning network TV. For me personally I stopped watching Saturday Morning Programs when NBC ended their TNBC block in favor for some crap run by Discovery Kids (I think). I know FOX went strong for a long time and ABC as well but in the end those networks just let someone else do the work Saturday Morning work for them so they would be in compliance with the FCC. And that brings us to where we are today with Saturday Morning! Crap TV! LOL!

It wouldn’t be a proper post without mentioning some of my favorite Saturday Morning Programs! I’m going to do a top five and then do some honorable mentions. 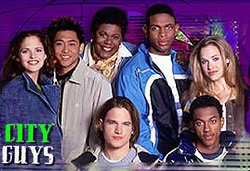 City Guys: C-I-T-Y you can see why, these guys, the new guys, smart and street wise. This show was amazing. It fit the time, it was hip and you had some great story lines. This is my favorite of anything that aired on TNBC.

Beetlejuice: Not my favorite cartoon (or even movie) for that matter. But it was on Saturday Mornings on ABC and pretty enjoyable. I thought the cartoon show was very creative and not to mention pretty funny. Reruns aired later on Nickelodeon after it’s Saturday Morning run was over. I’m sure many of you have forgotten about Bettlejuice!

Pee-wee’s Playhouse: Yes I’m guily! Just like any kid of the late 80’s and early 90’s I watched this regularly on CBS Saturday Mornings. I watched reruns years later as an adult and I’m still trying to figure out to this day why my mom let me watch this show. That’s just creepy even thinking about!

Garfield and Friends: One of my favorite cartoons ever. I always enjoyed his adventures with Jon and Odie. Even the U.S. Acres gang was pretty funny as well. Especially Roy Rooster. Blinky the Clown was pretty funny also. Very good show. If you haven’t seen it definitely check it out. Much better than The Garfield Show in my opinion.

Teenage Mutant Ninja Turtles (1987): Now if you know me well come on now. This is my number one show on Saturday Mornings. Even though the first three seasons had a syndication run CBS was very clever for picking this show up. TMNT was huge in the early 90’s and it being on Saturday Mornings not only added to it’s popularity but it got into the homes of many people who probably didn’t have cable yet. We will probably see no other show like it.

Honorable Mentions: Muppet Babies, The California Raisins, Saved By The Bell, Hang Time, Wild West C.O.W.-Boys of Moo Mesa, The New Adventures of Super Mario Bros. 3, Alvin and The Chipmunks, and The Sylvester & Tweety Mysteries. I didn’t put any FOX shows on this list because FOX Kids aired during the week and on the weekend. So I feel they weren’t true original Saturday Morning Programs in my opinion.  I know they had a few but I feel they weren’t strong enough to make my list.

So you heard my thoughts on Saturday Mornings! What are you thoughts? How do you feel about the current state of Saturday Morning Programming? What are some of your favorite programs from Saturday Morning? Care to share a list with me? Let me know in the comments below. Until next time! Blogging live to you and yours! It’s your boy TWOTALL4UFOOL! Remember that TOGETHER EVERYONE ACHIEVES MORE! Thanks for reading folks. Got an announcement for the next one so definitely subscribe and keep checking back for more content! LATEZ!

3 thoughts on “Whatever happened to good Saturday Morning Programs?”