Blogging live to you and yours! It’s your boy TWOTALL4UFOOL! So who didn’t want to grow up when they were young because they were Toys “R” Us kids? I know I certainly didn’t. In case you didn’t hear Toys “R” Us is shutting it’s doors and is starting to liquidate all their stores. For me I’m on two sides of this. As a customer including the times I went there as a child I’m sad that this toy store is going away. On the other side I am a former employee of the place. I do feel bad that many employees will be out of a job but at the same time I’ll tell you straight up that it is not a good place to work. I wouldn’t recommend it to anybody.

Let’s start with my childhood. Going to Toys “R” Us was the best thing ever when I was a kid. I remember going there on Sundays after church, for getting good grades in school, and even just asking sometimes. If my mom was in a good mood she would sometimes take us. I remember getting all sorts of toys from the place. Some of toys that I got from there I would like to apologize to my mom for asking for them. Some of the toys I used to play with if I could go back in time I would not have even asked. LOL! We also got video games from there as well. I don’t remember exactly which ones but I do remember one of the last ones we got from there was Mario Kart 64. During my middle school and even high school years I really didn’t go to Toys “R” Us to buy video games because there were so many other options. You had Funcoland/Gamestop, the mom and pop game stores, Best Buy, Target, Circuit City even. The list goes on and on where you could buy video games and all those were closer options to my home than taking a 25 minute drive all the way to Toys “R” Us.

My third year in college. I needed some money! I started dating a lovely young lady (now my wife), and I was broke all the time. What college kid isn’t broke all the time? So I decided to take a job there in the summer of 2006. It was my 2nd job and man did I hate it. I felt like I was working at a day care. There are so many irresponsible parents out there. They would just let them run nuts and tear up the place. I really had no good memories of working at the place. Not even the employee discount, which was a joke and you couldn’t even get a discount on anything in the R-Zone (video game section). I don’t even think I got my Nintendo DS Lite there. Maybe a game or two and some accessories but the unit itself nope. The only thing I did was help people on the salesfloor and clean up. I didn’t even work the register. Which I guess was kind of a good thing. And closing was the worse. It would say on the work schedule you have to work until 9pm (closing time), then they would expect you to stay and help clean up. That’s a load of crap if you ask me. At least schedule us until 10pm so the employees know what to expect. And I worked Black Friday that year. Oh my god. That day alone made me tell myself ‘my next job can’t be in retail.’. What really pissed me off was after the holidays they only started scheduling me only one day a week. That was my cue to bounce. I found another job. And I didn’t even give them a two week notice. I worked my new job a few days. I went to Toys “R” Us a day before I was suppose to work for them and told them I’m quitting. I put it in writing and left. I don’t regret the way I left them. They were screwing me so I went out found another job and left. They were probably happy that I was off their payroll.

I don’t really think that Toys “R” Us made very good business decisions over the years. During the time I was working there I had been hearing that they were in trouble. What was really weird that was in my area they had close a few stores then they opened newer locations. Did they have that kind of money? I think they did over expand just a bit. Another thing was the prices. With the exception of video games, do people really buy toys from there? Maybe Toys “R” Us exclusives, and collectors editions but that’s what people really went there for. But for your average action figure or doll you were better off going elsewhere if you want to get it for a cheaper price. Name the brand and it is probably cheaper at Wal-Mart, Target, and even Amazon. Those three retailers I feel is the main reason why Toys “R” Us is going out of business. In the end Toys “R” Us just couldn’t keep up with the times. They didn’t adapt.

The other day I decided to visit the local Toys “R” Us in the city I reside in today. It’s a newer location and one of the stores built after they shut down a few stores. I didn’t grow up going to this Toys “R” Us but I figured this is the last time I’m going to be in one of these stores. Why not? Just go check it out! First I went to see if the diapers were on sale on the Babies “R” Us side to get my daughter. Of course they weren’t. Even the video games were discounted but not diapers. LOL! Come on now! After looking at some toys and contemplating buying my daughter some then realizing she has a back log of toys we haven’t opened up yet, I was just like ‘ok I’ll get something for myself.’. I looked at some board games. None really interested me. Looked at some action figures. Stuff all over the place. Then I go to the video game section. All the Nintendo Switch accessories were gone. A lot of games for the PS4, and Xbox One to select from. Not very many from the Switch or Nintendo 3DS. Then I saw a game that definitely had a nostalgia factor to it. So I figured this made the most sense to buy. I picked up Ultimate NES Remix for the 3DS. It made sense because in the late 80s to early 90s I feel is when Toys “R” Us was at it’s peak selling many of the games on this compilation and of course the Nintendo Entertainment System itself. Why not get a compilation full of games you played as a kid from a place you loved to shop at as a kid. I don’t know about any of you guys out there, but I feel it was a great thing to buy that will be the last thing I ever buy from that store. 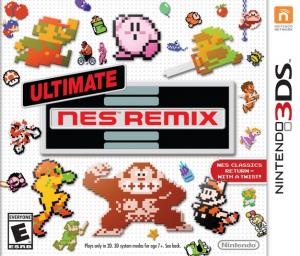 So in the end it breaks my heart a little bit that there will be no exclusive toy store here in the states for families to take their children. As a customer I feel bad and a little sad, but as a former employee of the place I feel that as a company it is getting what it deserves and I feel they only did it to themselves. It’s going to hurt a lot of people. Families, collectors, and even scalpers will be affected by this store closure. So I want to know people! Any Toys “R” Us memories you care to share? Are you going to check out the store before it closes? Let me know in the comments below. If you liked this post give it a like and feel free to share it around. Blogging live to you and yours! It’s your boy TWOTALL4UFOOL! Remember TOGETHER EVERYONE ACHIEVES MORE! Thanks for reading and deep down you know ‘I’ll always be a Toys “R” Us kid!’. 😉

One thought on “Long live Toys “R” Us”