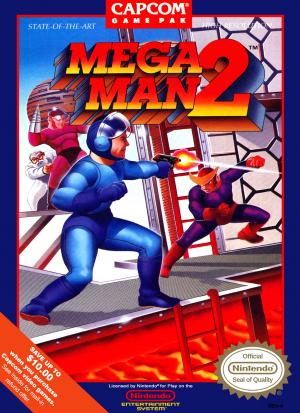 Initial Thoughts: I never played the original set of Mega Man games that came out on the NES. I didn’t even start playing any kind of Mega Man game until Mega Man X for the SNES came out. I played X, X2, and X3 and then after that never really went back to it as I didn’t have a PS1 early on, and the one on the N64 didn’t look all that great to me. I would eventually like to revisit some of those games. Maybe on the X Collection that is coming out later this year. I was told that the original games were very complicated and almost impossible to beat. Maybe back in the day they were but thanks to emulation technology I was able to beat this game. It wasn’t easy but with today’s technology you should be able to get through this game. I never thought I would have ever beaten a Mega Man game considering how hard the games are. I thought the X series was hard so I figured the original series was damn near impossible. That just comes to show you if you put your mind to a particular game anything can happen. Never say never folks!

Description: This game takes place one year after the original game. Dr. Wily the game’s antagonist is at it again and this time he’s put out more robots. You the player as Mega Man has to go out and beat all the robots in their unique levels, go to Dr. Wily’s Castle and go through more obstacles, which includes fighting the robots again, and finally the final boss. You start out with a choice of eight levels to choose from. At the end of each level is a robot or boss you have to take on. You can fight them in any order you like and you get unique powers of theirs after you defeat them. These powers make fighting the other robots or bosses a little easier than just using your regular powers. Though they say you can beat the game without using any unique powers at all. I say the experts are crazy. I’m not going to lie I did read a walkthrough to see what boss order I should go in. I didn’t follow it step by step but I came up with my own analysis and I’ll share a bit of a secret with you. Metal Man’s weapon is the most powerful. If you beat him you can beat a lot of the other bosses no problem. And he’s pretty weak and easy to be as well. As for some of the other bosses you may need other unique powers but if you go for Metal Man first or second you’ll have an easier time getting to Dr. Wily’s Castle. Beating that is a whole other story however. Unlike most NES games back in the day this game you could actually save your progress after beating each boss. You would get a password have to write it down and then continue or quit. Once you came back to the game you could either start over or continue by putting in that password. But being able to suspend your progress with emulation technology whether it be on an app like Retroarch or the NES Classic Edition makes things a lot easier. They should’ve did this back in day. Who knew right? But if you can beat this game whether it be on orignal hardware, on a compilation or emulator you’ll feel you played a great incredible game. Bottom line the game is fun regardless or what you are playing it on.

Final Thoughts: I thought the gameplay was incredible for the time. I wish I had tried it sooner back in my NES days. Actually probably not because I may have gotten frustrated and quit. I do think it’s a bit dumb how you have to face all eight of the bosses again before facing the final boss. Besides that it’s a great action game and you’ll be having hours of fun at it. It’s definitely the best of the other five Mega Man games on the NES. That’s probably why it made it on the NES Classic Edition. I recommend if you can play this game anyway you can do it. You’ll have blast. Great retro game to play and it will get you in the mood for Mega Man 11 coming out later this year that looks great.

Video Gameplay Footage: In this gameplay footage I beat 2 of the bosses for you. Bubble Man and Metal Man. Happy watching folks and enjoy the music!