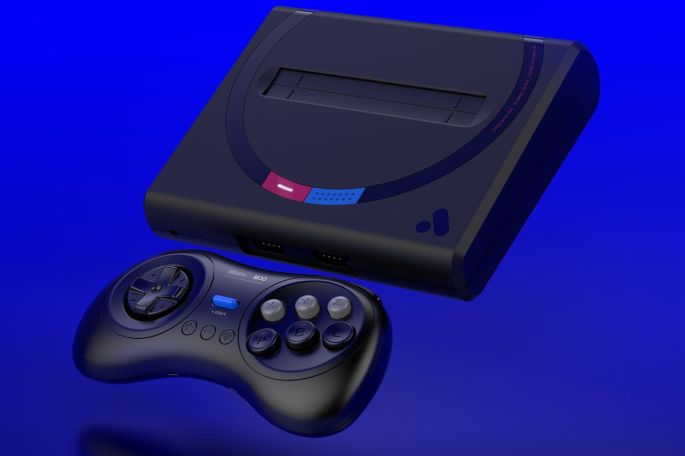 Blogging live to you and yours! It’s your boy TWOTALL4UFOOL! What if I told you that the console wars are back! Well sort of. The company Analogue that has put out clone consoles for the NES, and SNES has put out yet another clone console. However this one is a Sega clone console called the Mega Sg. They also teamed up with one of my favorite companies 8Bitdo to make some radical wireless controllers. This thing looks amazing. If you have a big Sega collection you may want to look into this thing. It appears that units will start shipping in April of 2019.

So this is going to do more than just play your old Genesis or Mega Drive games. It will also come with an adapter to play Master System games as well. And they are also going to put out cartridge adapters for the Mark III, Game Gear, Sega MyCard, SG-1000, and SC-3000. It looks like they will be sold separately when the thing comes out in 2019. It also has a connector for the Sega CD/Mega CD to play your Sega CD games. You’ll need the origianl attachment for that to the looks of it. Of course it will be able to connect to your TV via HDMI and it will give retro gamers another option. I know if I had a big Sega collection growing up I would be all over this.

As for the controllers with 8Bitdo behind it I can tell you that you’ll be getting some great quality controllers. They will come with a receiver so you should be able to use it for your original hardware as well as the Mega Sg. I would be surprised if you couldn’t use it on your original hardware but knowing 8Bitdo’s track record that’s how they’ve been doing it with the NES, and SNES. I heard earlier this year that 8Bitdo was coming out with Sega style controllers and I thought that rumor was false until I saw the unveiling of this. This should be exciting for anyone who was on Sega side back in the day.

This is kind of reminiscent of the console wars. We saw the Super Nt come out earlier this year and now with the Mega Sg coming out in April 2019 people may be choosing sides. It seem that more and more options are being made to retro gamers on how they can play their old games in a new way. Without the original hardware or hanging on to that old CRT TV. This is very exciting and this should give consumers something to get excited about. Too bad it’s not coming out this holiday season.

Anyway I just wanted to get this announcement out of there. I know there are a lot of retro gamers that read this blog and I always like to report on it when I see a great product that is coming out! They are priced $189.99 and they are taking pre-orders. Visit Analogue and read more about this and some of their other products. Are you going to get the Mega Sg? What side of the console wars were you on? Let me know in the comments below. Until next time. Blogging live to you and yours! It’s your boy TWOTALL4UFOOL! Remember that TOGETHER EVERYONE ACHIEVES MORE! Thanks for reading and for old time sake “Genesis Does”! LOL!